Social enterprise can contribute to positive economic, structural change by modelling a new way of doing business; and I believe there’s four elements they must be practicing as part of a new model.

Social enterprise and charity generally exist to address the results of inequality and disadvantage; feeding the poor, educating the disenfranchised, employing the unemployable. Where social enterprise differs from charity is by modelling a new way of doing business, a model that creates equity, a model for people and not solely for profits. 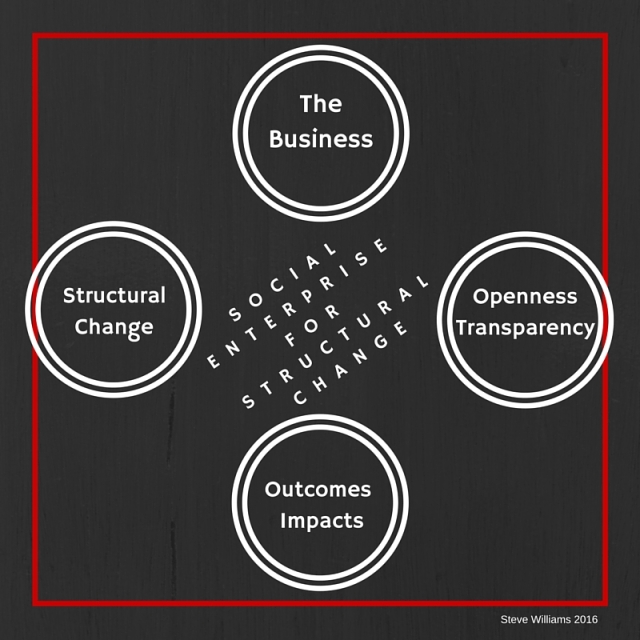 The Four Elements which I think are essential for social enterprise to create a fairer society through business are:

Openess and Transparency – In order to be exemplars of the sharing economy, social enterprises should be as open source as possible. Food Connect have been doing this for a decade, sharing software, knowledge, and skills freely to be a driver in the Fair Food movement in Australia.

Social enterprises should extend this openess to their financial modelling; showing people how they make money, where it gets spent, and what their profits (or not) are. Fear of showing up failure is understandable; but failure is our greatest lesson. By showing the world how we make or lose money, and where we spend it, we liberate ourselves from the tyranny of “keeping up appearances” associated with conventional (and some social) enterprises, who maintain secrecy in order to appear successful. I’m not advocating for a detailed PnL to be published every month, but at least a high level (and honest) overview would be a good start.

Outcome and Impacts – A social enterprise must be creating positive social outcomes and impacts, be measuring them, and then publishing them just as it should be publishing its financials. There are so many tools on offer to do this, social entrepreneurs just need to make the decsion to start measuring today.

The Structural Change – Is two fold:
1. Social enterprises should have a high level analyis of the structural issues causing the problems they exist to address. Without understanding that Trickle Down has failed, or why Arundhati Roy says Gush Up is creating massive wealth disparity, it’s difficult to move forward to create a fairer world; we’ll just keep operating in the same paradigm.

2. Social enterprises should be modelling a new world of doing business which runs counter to everything we have been taught about business; about competition, scale, and the profit motive.

The new world of busines needs to be acting collectivley and collaborating (that’s why we set up the Queensland Social Enterprise Council – so we had a collective voice); and there are already great examples of this in practice such as worker-owned coops, B-Corps, and enterprises creating foundations for profit distribution into ‘for-good’ work.

The way we will create great change is through educating ourselves as practioners about the dynamics of economic power, and creating demonstrable ways of doing business in a new paradigm. If not, we may as well be placing band-aids over the open wound of disadvantage.